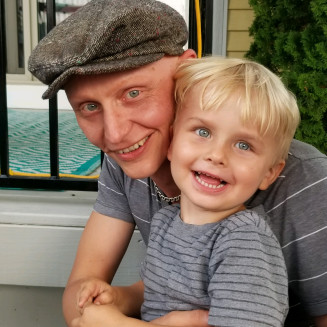 Register in honor of Daniel

He helped others live a more enriched life...

My son Daniel took his last breath in July 2020 at age 37. While tubing on a lake in Michigan, he sustained major trauma to his brain, which left him in a coma. He was in ICU for several days before being taken off of the respirator. Daniel was a donor, and he would be pleased to know that his organ and tissue donations helped others live a more enriched life. Daniel leaves behind his son, Enoch, and many family and friends who love him.

Daniel’s entire life was laced with colour…painting outside the lines, and making everything his own. Dan loved drawing and painting. He had an amazing eye for composition and drew from his heart and soul. As a self-taught musician, he adored playing the drums, but guitars were his real passion. He had quite the collection.

Daniel was an analog dude living in a digital world. He was tactile, sensitive, caring, loving and had a huge heart. He loved people. And people were drawn to him. He’d introduce new friends to me by saying “mother, this is my new best friend…” and to him, that was absolutely true. He was loyal to his connections. He initiated phone calls, keeping in touch with friends and family. He especially adored talking to his grandmas, and they cherished their time with him. Daniel had a way of making you feel like you were his only priority. When he was with you, he was 100% there.

Daniel was organic, he was raw and sometimes unfiltered. He wasn’t trying to be anything he knew he wasn’t. He didn’t have to, what he was was genuine…he wasn’t perfect, but he lived in his skin very well.

When life gave Daniel lemons, he tried to paint them gold! Be at peace my baby…until we meet again.