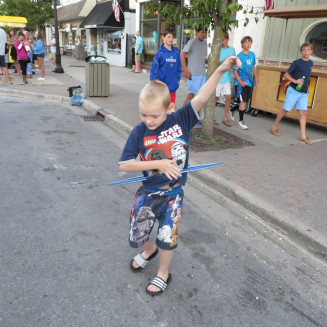 So far, 21 people have registered in honor of Calvin. You can too.

Register in honor of Calvin

Full of life and the joy of living...

Calvin. Described by so many friends and family members as kind, loving, cheerful, smart, friendly, witty, funny. . . the list goes on.

He was not originally named after the “Calvin & Hobbes” comic strip (written by Bill Watterson) but when he received his first stuffed tiger at the hospital when he was born, our Calvin & Hobbes journey began. Calvin James Mosman is the Calvin from the comics incarnate – only maybe kinder and more generous. But just as clever, witty and full of life and the joy of living.

Calvin loves climbing trees, swimming, getting muddy/dirty, riding his bicycle, going to school (unlike his comic counterpart,) and, of course, playing with his stuffed tiger, Hobbes, as well as his striped kitty Hobbes.

Calvin suffered a fatal asthma attack in May 2014 and later was declared legally brain dead. He lives on, not only through the gifts of his donations, but in our hearts and through all the memories and stories from the people whose lives he touched.

I don’t speak of him in the past tense, I believe he is still out there, climbing trees, getting dirty and having a wonderful time where he can run without stopping. I love you, Cali-monster, to the ends of the universe and back times infinity plus 3. I will see you again when the time is right. ~Mommy