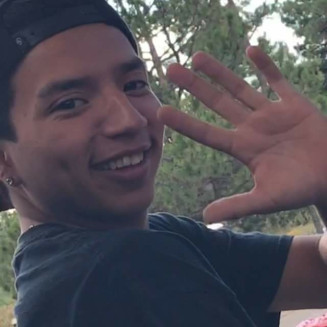 Register in honor of Ronin

He will forever be missed and loved...

Ronin loved to laugh and to make others laugh. Everywhere he went he had that infectious, dimpled smile on his face. I never heard him criticize or have a negative comment about anyone, even if others thought it was deserved. He couldn’t even scold his dog when she tinkled on the carpet. He’d just shrug and clean it up. He loved his big brothers and big sister, and adored his little nephews and niece. His face would just light up when he saw them. I think he just liked that there was someone younger than himself who he could watch out for. He was the family baby for so long… The youngest of my children. He was the light of our world. We all doted on him.

He graduated high school six months ago and we were so proud of him. We bought him his first car as a graduation and 18th birthday gift. He couldn’t wait to take it mudding out in the woods. Lol, he blew out a tire and crashed it the first time he took it and called home panicking… I scolded him, then told him at least he was okay. Later, I wished I was more like him and just let him know that the only thing that REALLY mattered was that he was okay and left it at that.

When he got his driver’s license we talked about the donor option. He wanted to know what it was so I explained to him what would happen, and even though he had just barely turned 18 he decided he wanted to sign up. I asked him “Are you sure?” He looked at me straight in the eye and said “Yes, mom, I’m sure.”

Our family has received the comfort that a little bit of him is still out there touching peoples’ lives on a daily basis. In a way that makes him live on… not just in our hearts but in those he helped and their loved ones.

He will forever be missed and loved.