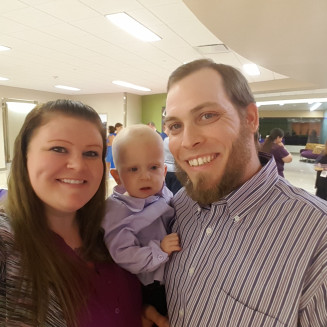 Register in honor of Oliver

He is now a year and a half old and doing wonderful...

When we were pregnant with our son Oliver, they discovered his heart looked suspicious in his 18 week anatomy ultrasound. At 20 weeks our obstetrician said his heart definitely appeared abnormal and we were referred to a perinatal specialist. After the perinatal specialist confirmed the only abnormality was Oliver’s heart, we were sent to Phoenix Children’s Hospital (PCH) to the Fetal Cardiology Program where we began Oliver’s transplant journey with a diagnosis: Cardiomyopathy Dilation of the Left Ventricle.

On the same day we received his diagnosis we discussed transplantation. We were given a few possible outcomes that would allow Oliver to live with his diagnosis, but transplant quickly became our only chance of taking our baby home. As his heart grew sicker our doctors questioned if he would even survive the pregnancy.

At 33 weeks my water broke. We were devastated. Our goal was to get to 36 weeks in pregnancy to give us as much of a full term baby as possible, so that he would survive the operation. At 12 hours old Oliver was transferred from our delivering hospital to PCH, and they immediately began the transplant qualification process. At 4 days old Oliver was listed on the national waiting list for a new heart. Just 48 hours after being listed a donor match was found for Oliver.

At 6 days old, still 6 weeks premature, Oliver is believed to be the youngest premature baby by gestational age to receive a heart transplant. He is now a year and a half old and doing wonderful.

The only reason my son is here today is because a family chose organ donation in their time of loss. They gave my son his only chance at life, with such tremendous generosity that we are so grateful for.