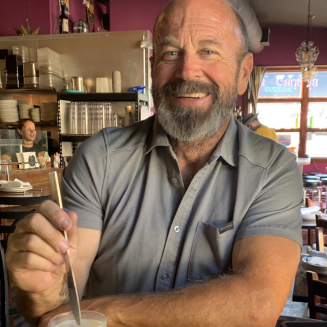 Register in honor of Michael

He had a beautiful soul...

Mike was the most loving, happy, considerate man you could ever know. He always went above and beyond to help others, including complete strangers, in any way he could. He treated everyone with love and respect. He had an amazing sense of humor and loved to make people laugh.

Mike and his wife Anna owned and operated a Paintless Dent Repair (PDR) company called Dent Knock Out, which they started together in February 2003. He loved the work he did and found great joy working side by side with his wife.

Mike loved children and helped raise not only his own but also several friends of his children. Mike was seen as a father figure to many. He took great pride in caring for others, never expecting anything in return.

Mike enjoyed collecting Johnny Lightning toy cars and proudly displayed several hundred of them in a large curio cabinet, which would be seen by anyone walking through the front door of his home. While many of the collector cars where worth a good deal of money, Mike didn’t care and removed all of them from their original packaging so he could play with them. The money never mattered to him; he simply enjoyed having them.

Mike was incredibly loved and cherished by anyone fortunate enough to know him. He made friends instantly and for life. He was known to regularly check on his friends and loved ones, providing any kind of support, love or companionship they may need. He would happily give his last dollar to someone in need.

Mike passed suddenly and unexpectedly in December 2019, leaving behind many heartbroken family members, friends and loved ones.

Though it was unknown prior to his passing that he had registered to be an organ donor, it wasn’t a surprise. Mike gave so much of himself while alive, it made sense that he continued to give of himself and continued to help others after his passing.

He had a beautiful soul and, although he lives on through the lives of others, he will be greatly missed.