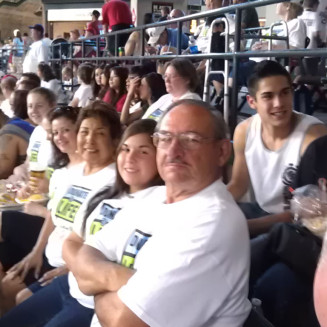 Register in honor of Betty

when I was diagnosed with kidney disease. Being a young and vibrant 21-year-old, I wasn’t scared though I was told I could have complications in the future. I had a brain aneurysm in 1993 due to my kidney disease. By the grace of God did I survive, as most people don’t.

After having acute renal failure (in a matter of three days) in 1999, I was sent to dialysis. Terrified and sure I was dying, I resigned myself to the fact that I would be tied to this machine for the rest of my life. Losing strength and weight, I continued to sit and pray for another day.

Enters my Knight in Shining Armor:

On a Saturday afternoon, my husband and I invited my cousin and her new husband over for a barbecue. He inquired about my dialysis, and I gave him a condensed version of what it was like. He listened intently but asked few questions. The following morning, I received a call from him. He said, “Hi Betty, this is Lou. I’m calling to tell you I want to give you a kidney.” After stammering for a few seconds, I replied, “Lou, this is not like you are loaning me $100. You won’t be getting this back.” To which he replied, “I know.”

I stayed on dialysis for two years because I was terrified about the transplant.  I couldn’t believe someone who I barely knew actually wanted to give me a kidney.

While sitting next to my friend Myron Stevensen while we were both on dialysis, I saw my donor on TV. He is the Director of Sema at Papago Buttes, Air National Guard Base in Scottsdale, and he was televised for speaking to the governor. I told Myron, “Look, there is the man who wants to give me a kidney.” After being scolded by my friend, he convinced me to get the transplant. I called Lou and the rest is history. In 2001 I was the 29th person at the Mayo Hospital to have a kidney transplant.

I was once a terrified little woman who was graced by one person I barely knew. I overcame the fear of transplantation by a friend’s motivation to choose life!